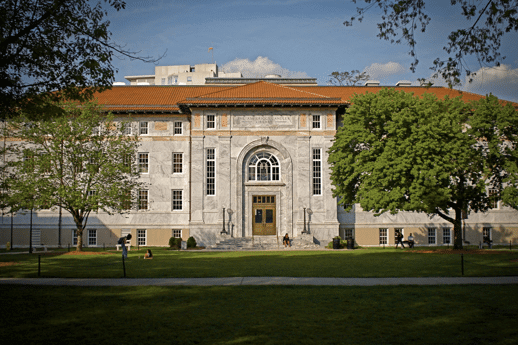 Emory was founded in 1836 and is a private research University located in Atlanta. There are nine academic divisions: Emory College of Arts and Sciences, Oxford College, Goizueta Business School, Laney Graduate School, School of Law, School of Medicine, Nell Hodgson Woodruff School of Nursing, Rollins School of Public Health, and the Candler School of Theology. The University's proximity and relationship with the Centers for Disease Control and Prevention enables medical, biological, chemical, and health sciences students the opportunity to conduct research with the world's leading global health and infectious disease experts. Emory University Hospital has the world's most advanced isolation facility. Emory University's Center for AIDS Research (CFAR) is a world leader in AIDS Vaccine Development and HIV Parthenogenesis studies. The center is funded by nine different institutes of the National Institutes of Health and by the Georgia Research Alliance. Emory Healthcare is the clinical portion of Emory University's Robert W. Woodruff Health Sciences Center, and is the largest health care system in the state of Georgia. Many of its hospitals are staffed by Emory Clinic physicians, who are faculty at Emory University School of Medicine. The Emory Healthcare Network is the largest clinically integrated network in the state of Georgia with 200 locations and 1,800 physicians in more than 70 specialties. Emory is 16th among the list of colleges and universities in the United States by endowment, 14th in the nation for best values among 100 top private universities in Kiplinger's Personal Finance, 6th for most amazing college campus in 2014 by The Best Colleges, 26th in Washington Monthly's 2013 National University Rankings, and is ranked the 21st best college among national universities in United States according to U.S. News & World Report 's 2015 rankings.[7] According to the Times Higher Education World University Rankings, "Emory University is one of the top universities in the world" and currently ranks 80th among global universities. Emory has been designated by Newsweek as one of America's 25 New Elite 'Ivies.' The university has nearly 3,000 faculty members 7,700 undergraduates and 6,700 postgraduates.

The project is currently in the midst of the design phase.  The various teams have completed the Fit-Gap phase where they analyzed the existing Current State 9.0 customizations, reviewed new functionality available in 9.1 and 9.2, and reviewed a listing of pain points discovered by Emory during a series of Listening Tours. The various teams then developed Business Cases to support changes in the Future State and presented them to Emory leadership so that the official Project Scope could be set. This was met with unanimous approval by the Emory leadership and the project has continued into design. Elire has also provided strategic business process improvement review and redesign services, as part of this larger upgrade project. The process improvement team will ultimately be completing business process training with Emory project leadership, putting the power in the client’s hands to continue the improvements already achieved during this large undertaking.