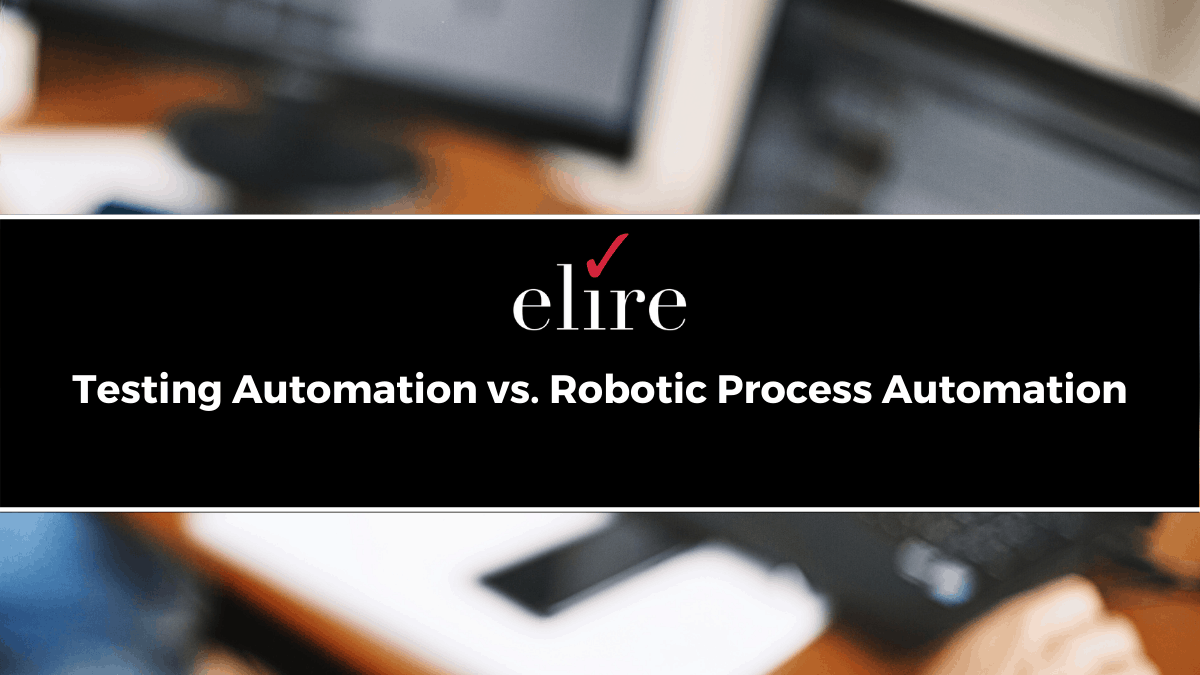 When choosing between Testing Automation and Robotic Process Automation (RPA) for software testing, there are few key considerations and use cases that will help you determine which method will work best for your organization. At a very basic level, Testing Automation is a process where developers and IT departments are able to automate testing procedures using a code or software tool. Robotic Process Automation is a practice of automating business processes using coded software robots designed to complete specified tasks.

Testing automation allows you to build confidence in your product and organization before you go-live. Having a testing strategy in place is a necessary step towards accomplishing your testing goals. Automation of this testing process can ensure that you’re saving time and being consistent by completing tests the same way every time, and that the product you deliver is top quality.

As a more general and widely applicable solution that has a greater scope of use beyond just software testing, Robotic Process Automation can automate a wide variety of business processes, including software testing.

Project Managers and business leaders will see the greatest benefits from RPA by automating repetitive, highly manual tasks that require a large number of full-time employee (FTE) hours to complete. These processes are rule-based and can be defined and then executed by the software robots, often dealing with readable and standardized electronic inputs that have a low “exception” rate to the rules put in place.

What are the top benefits of Testing Automation?

One of the primary benefits Testing Automation has to offer is Testing Scope Expansion, which is useful for when that process takes longer than 10 min to complete for each cycle. For example, entering a requisition. Most organizations will simulate variations on the user, the category, the item, the chart field combo to vet out any issues. This type of repetitive testing is perfect for automation.

Automation can also increase the scale of these tests from five to several hundred or even thousands of permutations since it can look and even alter its input parameters. Testing Time Reduction is another key benefit. Scripts can be executed during the evening and weekends, and they can be split up into parallel streams for additional speed.

Automation also offers Testing Consistency. An automated script will run the same way over and over again without error. A manual tester might forget a field or forget to process something.

What are the top benefits of RPA?

With RPA, you’ll free up time so resources can focus on non-repetitive tasks thus bringing more value to an organization. RPA can help remove the presence of human errors in repetitive tasks and ensure further stabilization in the operations of an organization’s process stream. RPA also increases the speed that transactions are processed, saving your organization time and money.

What are some circumstances where Testing Automation wouldn’t be advisable?

Testing Automation might not be the best solution when human interaction is required multiple times during the execution process of individual components. In cases where inspection of an output such as PDF or Check Print is needed with the human eye, automation isn’t suggested. Another case is when the integration cannot be processed, or data sourced from the 3rd party system and used with the automation software.

When would the use of RPA be inadvisable?

Robotic Process Automation isn’t ideal when ROI cannot be achieved within 5 years, if a high level of human interaction is needed and requires that there will be multiple pauses in the automation process, when the automation process touches more than three core operational procedures at once, or when errors have caused downtime with RPA already implemented and issues continue to persist.

What are some key cost considerations for Testing Automation and RPA?

The non-production testing automation will not cause any harm since most non-production environments are not used by end-users and won’t affect company operations. Worth noting is that Testing Automation can also lead to an expensive effort if the script length or count is large and the data sets lead to complex looping mechanisms.

What is the timeline/implementation effort required for Testing Automation and RPA?

With Testing Automation, you will have a holistic approach that will target many modules and business processes and could involve hundreds of scripts in some cases. Extra care must also be taken to ensure that data staging and sourcing are addressed. This might equate to a rather large project involving multiple individuals.

With RPA, a much narrow scoped effort involving very specific processes will be considered. The RPA scripts will need to be developed by extremely skilled individuals since they will be used in production-level environments, and multiple cycles of RPA script testing must occur.

Also, take a look at our recent webinar recording for “Automating Processes with RPA & Chatbots,” a session recorded as part of the 2021 Elire Strategy Summit that offers a more in-depth overview of RPA and Chatbots and provides specific use cases for when to automate. Viewers will learn exactly how to optimize business processes through the thoughtful use of Robotic Process Automation (RPA) software, Chatbot technology, as well as other tools.

When it comes to emerging technology, one size does not fit all – so this webinar identifies the strengths and weaknesses of RPA and Chatbots, as well as details the difference between process automation and process acceleration. Elire showcases opportunities within your organization to automate low value-add repetitive tasks with these automation tools. View “Automating Processes with RPA & Chatbots” here.